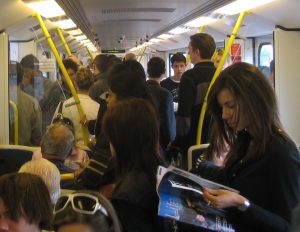 Earlier this week I met with the Rail Minister, the Rt. Hon. Theresa Villiers MP, to discuss the urgent issue of overcrowding on our trains and the delays in additional rolling stock coming to Greater Manchester.

As an issue that is regularly brought to me, I am very aware of the concerns that residents of south Manchester have and I took the opportunity to put these concerns across to the Minister. Along with my Liberal Democrat colleagues Mark Hunter MP and Councillor Keith Whitmore, in his capacity as Vice-Chair of the Greater Manchester Integrated Transport Authority (GMITA), I pressed the Minister to provide a greater number of carriages for trains operating in the area.
It is ridiculous that additional carriages in Greater Manchester are dependent on other schemes going ahead around the country, and the “cascading” of carriages from one franchise to another. I argued for the simplification of the process, so that new rolling stock for Manchester is not dependent on new trains in London!