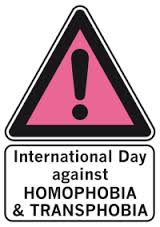 Today is an important day in the calendar of LGBT communities all over the globe, it is IDAHO.

The International Day Against Homophobia and Transphobia (IDAHO) got started officially in 2005 after a year-long campaign to spread the word and get people on board. The idea came about in 2004 as a celebration of the removal of homosexuality from the International Classification of Diseases of the World Health Organisation (WHO) in 1990, on the 17th May.

The organisers took the date of the removal and turned it into a celebration, now every year IDAHO is celebrated on 17th May. It’s incredible to think that just 23 years ago the World Health Organisation considered a gay man or woman to be mentally ill.

Thankfully times have changed and IDAHO has been paving the way as an international force by working with local groups over the world to reduce prejudice and promote LGBT causes.

There are lots of local events on today and tomorrow. Please get involved.

The LGF are organizing a vigil marking IDAHO. There will be speakers and an opportunity to pay tribute and respect all those who have suffered intolerance and prejudice because of sexual orientation or gender identity.

On Saturday 18th May a community ‘Flash-mob’ event will be held in central Manchester. Inspired by The Great Global Kiss - In which took place on the weekend of IDAHO in 2010, The LGF want people to unite against hate, intolerance, inequality and injustice in society by creating an atmosphere in which couples can show their love and affection for one another in a positive and powerful way.

The LGF is inviting all lesbian and bisexual women to join them.


Find out more about our work - sign up for emails today: