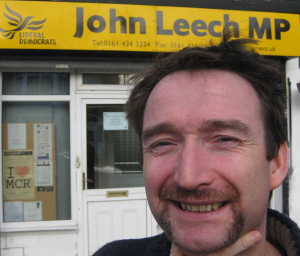 I am involved with many Cancer groups and campaigns. Above is my most recent dodgy Movember photo,

My view has always been the same. Everyone deserves the best cancer treatment, free, paid for by the NHS.

I know that there is a cancer drug fund to help pay for drugs which are not approved by NICE.

But there are 24 pages of guidance, and the very process of applying can put some people off.

Yesterday, I welcomed the licensing of Vermurafenib by NICE (National Institute for Clinical Excellence). This drug  has been described as the biggest breakthrough in advanced melanoma treatments in 30 years.

The drug has been licensed for use in the UK but is yet to be offered on the NHS. This year NICE will rule whether the NHS can offer the drug following an assessment of its clinical and cost effectiveness.

In May, NICE are also looking at the prostate cancer drug  Abiraterone. Last Month, I submitted an EDM calling for Arbiratone to be made available on the NHS. MP's from 8 different political parties have signed it so far.

Some 32,500 men are diagnosed and 10,000 men die from prostate cancer each year in England and Wales. Tests show that Abiraterone would improve the quality of life for many of these men, and on average extend life by four months.

NICE do allow some more expensive drugs than Abiraterone to be used, but because this drug can help more people, they say it will cost too much. I think that is wrong.


Also in May, NICE are appraising Breast Cancer Tests Oncotype DX and IHC4. Both have proved effective in predicting cases where cemotherapy would be effective. In January I submitted an EDM on this.

I hope that NICE will allow both the Oncotype DX and IHC4 tests, and Vermurafenib and Abiraterone to be used on the NHS in The Christie and across the country. People deserve the best, and these drugs are currently the best for many patients.