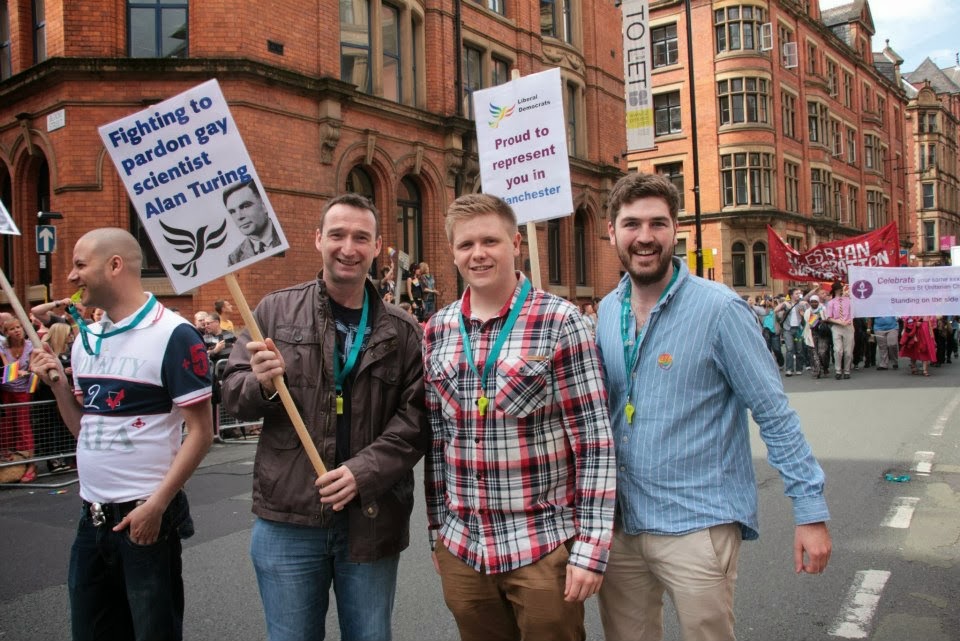 South Manchester's Liberal Democrat Parliamentary candidates are calling for Wythenshawe's Leningrad Square to be renamed after LGBTQ computer pioneer and war hero Alan Turing.
Wythenshawe Liberal Democrat prospective MP Victor Chamberlain and South Manchester Liberal Democrat MP John Leech have written to Manchester Council to demand the square is renamed to honour Alan Turing. Manchester is currently twinned with St Petersburg (formerly Leningrad), the birthplace of Russia's appalling anti-gay laws which bans "homosexual propaganda".
"Baby", the first modern computer, was born in Manchester thanks to Alan Turing's work at the University of Manchester. Turing was arrested by City of Manchester police in 1952 for homosexuality and was punished with chemical castration. John Leech MP led the campaign which won a posthumous Royal Pardon for the gay scientist who invented the code breaking Enigma machine which helped Britain defeat Nazi Germany.
Wythenshawe PPC and former Manchester City Councillor Victor Chamberlain said: "Leningrad Square is an insult and embarrassment to the thousands of Lesbian, Gay, Bisexual, Trans and Questioning people in Wythenshawe and Manchester. Our city leaders should get with the 21st century and stop honouring a city and country where LGBTQ people are so appallingly discriminated against.
Sadly too many LGBTQ people still suffer discrimination in our city. Renaming a Wythenshawe landmark after a gay Manchester hero would show solidarity to everyone fighting for equality in Manchester, Russia and around the world."
John Leech MP, has tabled a Parliamentary motion in support of the campaign, added: "I was delighted when the Coalition Government listened to the thousands of activists and campaign I led in the Commons to pardon Alan Turing. Manchester has so much to thank Alan Turing for. His efforts significantly shortened the war, saved lives and helped create the modern world we live in. That's why we're calling for the Council to properly and permanently honour this national hero. It would also help our fight to pardon the thousands of other gay men who were wrongly convicted."
An online petition to pardon Alan Turing received over 37,000 signatures and was set up by local resident Will Jones. Mr Jones, who is also Victor Chamberlain's election agent said: "Alan Turing was convicted on 31 March. It would be great if Manchester Council could back back Victor's and John's campaign before this year's anniversary."