Guest Blog: Cllr Mike Haw: The wheels of justice are starting to turn for the 96.

I welcome the announcement made this morning by the Director of Public Prosecutions (DPP) and the Independent Police Complaints Commission (IPCC), that they will be launching an investigation into possible wrongdoing over the Hillsborough disaster.

Immediately after the findings of the Independent Hillsborough Panel Report were published, the Deputy Prime Minister Nick Clegg stated that "The wheels of justice must now turn", and I now feel that these very wheels are now moving in the right direction. Moving us closer to gaining justice for those 96 Liverpool fans that died at Hillsborough.

For twenty three years, the people of Merseyside have been condemned as self-pitying and told to "get over it" when any attempt to disseminate the truth was made. It is only right that all those in authority who committed potential criminal and misconduct offences are criminally investigated. If criminal conduct is found, then they should be referred to CPS and then prosecuted to the full extent of the law if found guilty.

I have previously written to the Head of the Civil Service, Sir Bob Kerslake, demanding that disgraced former MP, Sir Irvine Patnick's knighthood be removed. The former Sheffield Hallam MP, immediately after the disaster took the lead, briefing the media, most notably the Sun newspaper that Liverpool fans were to blame.

Here is his reply. 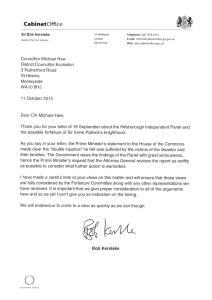 In the light of these developments it is also even more essential that the Attorney General applies to the High Court to quash the original inquest verdicts and seek new ones. The Director of Public Prosecutions has announced today that he will review the evidence, so this needs to happen immediately.

Twenty three years was too long to get here, we as a society now need to ensure that it doesn't take another twenty years to bring justice to those families of those who died, those that were injured and those who were traumatised by the terrible events on that fateful day on 15th April,1989.