John Leech has challenged homophobia and worked with the government to promote Lesbian and Gay rights for a long time. He believes that same sex partnerships should be recognised by all European Union countries and has supported the ‘Partners without Borders’ campaign advocating that the EU should legislate and ensure that the injustices of British same sex partnerships that aren’t recognised in other EU countries are accepted. He helped same sex marriage become legal in the UK by voting with an indefinite ‘yes' in the Equal Marriages bill at all stages.

In 2014, the release of the acclaimed motion picture, The Imitation Game, saw a significant rise in awareness for Alan Turing and the injustice that he and many others suffered. During the moving last few moments of the film, we were reminded that it had been just fewer than 12 months since Turing was granted his long awaited, and deserved pardon.

However, what many don't realise is that the petition to have Turing pardoned, was started right here by John Leech back in 2011. John and his team picked it up, started and continued to front the campaign before officially submitting it to Parliament, strongly urging all to support it. The campaign was met with overwhelming success, when on 24th December 2013, Turing was granted a posthumous pardon by Queen Elizabeth II. This remains a very rare event. 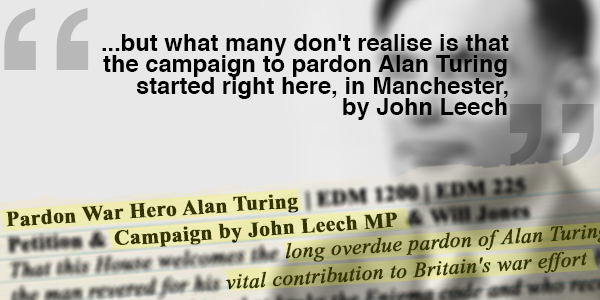 The campaign was a huge victory, but it is far from over. John's campaign now moves to allowing the 75,000 other men who were criminalised in a similar way to receive a disregarded conviction. The campaign is on-going and you can sign our petition here.

John has helped impose tougher action against discrimination in football. Stating that fans have been priced out for too long he proposed homophobic chanting to become a criminal offence.

Thanks to John’s passionate belief in equality he advocated for support on a bill that would see the UK’s commitment of spending 0.7% of the national budget on overseas aid. John’s passion has helped support the poorest in the world and enshrine the promise into British Law.

Many of John’s constituents have asked him to support Lib Dem MP Michael Moore’s International Development Bill. UK aid changes and saves lives every day. Since 2012 British aid investment into vaccines and health has contributed to the biggest ever fall in child deaths, saving a child’s life every two minutes from preventable illnesses such as pneumonia and diarrhoea. Since 1990 the number of children dying unnecessary deaths has been cut almost in half, from 12 million a year to 6.9 million. Aid has also contributed to improving education, health, sanitation, gender equality, and other public services that sustain a developing economy and add to global growth.