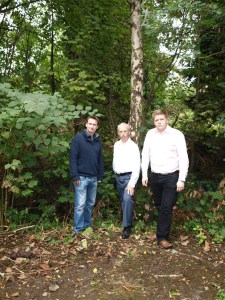 CHORLTON RESIDENTS are celebrating after Manchester Council yesterday changed its mind about spending £50,000 to reopen the 65-year-old Footpath 181. The footpath used to run from Claude Road, behind Chorltonville alongside Chorlton Brook and came out on Barlow Moor Road, but has been closed for decades. Residents opposed the reopening because they felt it was a waste of public money and were concerned about the potential increase in crime.

Yesterday Council Bosses confirmed that following local opposition they have decided to stop up the full length of Footpath 181 as provided by Section 116 of the Highways Act 1980. The Council will be advertising the stopping up order and making an application to the courts.

Chorlton Lib Dem Councillor Victor Chamberlain, who joined residents in opposing the plans, said: “This is great news for local people. The Council says it has no money yet was willing to spend £50,000 and potentially even more to reopen a historic path local residents didn’t want. It’s taken the Council months to see sense but I am pleased they have finally made the right decision”

Chorlton Park Lib Dem Councillor Bernie Ryan said: “I was concerned that a reopened path would result in more criminal activity and prove a nuisance for local residents. This is welcome news for residents in my ward.”

Chorlton Resident and former Police Inspector Matt Gallagher said: “It is thanks to the concerted opposition campaign from local residents, Councillors and Chorlton Police that the Council have changed their mind. The Council U-Turn shows how powerful the community can be when we work together.”