Posted by Pablo O'Hana | Updated 2010-03-13
After my advice surgery at Didsbury Mosque Rob Mackle (our candidate for the forthcoming Council elections in Old Moat) and I went to the craft fair at Ivy Cottage on Barlow Moor Road in Didsbury.
I always find that they are really good events to go to when you want some inspiration on buying presents. At a similar event before Christmas I bought numerous presents for people that I didn't have a clue what to buy them.
I picked up an unusual necklace for my Mum for Mother's Day, and Rob bought a handmade blue octopus for a new-born baby in the family.
The Ivy Cottage on Barlow Mooor Road in Didsbury has a great website full of information and news which can be found at ivycottage.org.

Visit to the Christie Cancer Centre at Oldham

All Party Group for Muscular Dystrophy

Posted by Pablo O'Hana | Updated 2010-03-09
After the Westminster Hall debate this morning I went to the All Party Muscular Dystrophy Group.
Following the Walton Report we have been monitoring the progress made by Specialist Commissioning teams from around the country in carrying out reviews of services and highlighting gaps in provision that need to be filled.

The NHS has asked local Trusts to find a staggering £30 billion of savings and so I asked a number of questions about what impact these necessary cost savings will have when the Specialist Commissioning groups (SCGs) are potentially trying to find extra resources.  While there was general agreement that some savings could be made without impacting on services, I was not convinced that any of the SCGs were really convinced that they would be able to fund the services that are required.


This morning I was speaking on behalf of the Lib Dems in the Westminster Hall debate on the Government's policy on motoring. There is a real myth that motoring has become more expensive, but in real terms the cost of motoring has fallen by 13% since 1997, while the cost of travelling by bus or coach has risen in real terms by 17% and rail travel costs have risen by 7%.

As well as talking about the cost of motoring I spent some time talking about safety on our roads and my support for a reduction in the speed limit from 30mph to 20mph on local roads, the need to reduce the drink drive limit to bring us into step with most of the rest of western Europe, and the safety benefits of speed cameras - with particular reference to the impact of the cameras on Princess Road in my constituency, where the cameras (which I campaigned to be installed as a Councillor many years ago) have significantly reduced the number of accidents on the road.

We don't have many transport debates, which is a real shame, but it is not that surprising when you consider that nobody other than Nigel Evans, who called the debate, and the transport spokesmen from the 3 parties was there to speak (although there were a couple of interventions)!

Posted by Pablo O'Hana | Updated 2010-03-09
Yesterday afternoon I attended an event hosted by The Northern Way to promote the Northern Hub (previously known as the Manchester Hub). The proposals being put forward by Network Rail would help transform the rail network, not just in Greater Manchester, but for the North of England (hence the renaming). To ensure that the economy of the north can grow, we need to ensure that the Northern Hub is funded.

By coincidence I was being interviewed this afternoon about the massive gap in funding of public transport between London and the rest of the country. The North West receives per capita about a third of that of London. This must change, and a good start is ensuring that the Northern Hub is fully funded.

You can find out more about The Northern Way initiative here: www.thenorthernway.co.uk 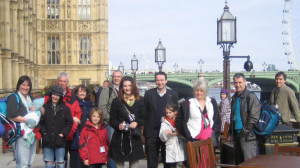 This morning I met with a group of home educating parents and their children who had come down to London to visit Parliament.

My office arranged for them to have a tour of Parliament and then I showed them around the bits you don't see on the tour.


I recently answered five quick fire questions for ManchesterStopWar.org, the Greater Manchester Website for the Stop the War Coalition.

1. Do you agree that we should bring British soldiers back from Afghanistan now? - Yes

2. Are you opposed to the Trident replacement? - Yes

3. Will you call for an immediate end to the siege of Gaza? - Yes, and to all acts of violence

4. How will you help stop the tide of anti Muslim hatred?
I have argued for the banning of EDL marches, put my name to letters, and joined others protesting against the desecration of Muslim graves in my Constituency.

5. How will you strengthen our right to protest?
I will always support the peaceful right to protest, so long as it does not infringe on the liberty of others. I took part in the "illegal" reading out of the names of the war dead in Parliament Square, and I believe that people should be able to protest outside Parliament.

The Full article can be viewed here:


I have heard first-hand from teachers how reducing class sizes would have an instant and positive impact on the class environment. Schools in England have some of the largest class sizes in the developed world and teachers are often less able to even give enough attention to individual pupils, which naturally has an impact on their achievement.

We can see evidence of this in figures that show that children from less well-off families are not as likely to get five good GCSEs as their better-off classmates. Only one in five pupils who qualify for free school meals gained five A-C grade GCSEs in 2007. Clearly there needs to be targeted investment at schools so they can support children better.

A central part of the Liberal Democrat manifesto is to give every child a fair start in life. We propose spending an extra £2.5bn on schools, guaranteeing them the money they need to support children who might be struggling. This cash can be used to cut class sizes or run catch-up classes, both of which will ensure all pupils get the support and individual attention they need to achieve their potential.

How much money each school gets in this new ‘Pupil Premium’ will be calculated according to the number of pupils eligible for free school meals. On current estimates, this equates to around £2,500 per pupil nationally.

Nick Clegg was on the Political Slot introducing the Pupil Premium recently, you can see the video of him talking about it here:  budurl.com/cleggpupilpremium

Posted by Pablo O'Hana | Updated 2010-03-04
This morning I attended the offical opening of the Breakthrough Breast Cancer Research Unit at The Christie.
This is an innovative project between some of the worlds top clinicians and scientists, led by Tony Howell (Director of Breakthrough Research Unit, Manchester) together with the University of Manchester because of the University’s leading reputation for cancer research. It is based within the Manchester Cancer Research Centre in the Paterson Institute for Cancer Research and is adjacent to the Christie Hospital NHS Foundation Trust, Didsbury.

I found the presentation fascinating as it delivered a clear message that Research and Treatment experts collaborating in such a way can drastically improve chances of survival of this terrible disease by integrating reseach and treatment studies on one site. They aim to find treatments which work in a totally new way – by stopping cancer cells using healthy cells to grow and spread.

The Research Unit has been set up with an initial £500,000 donation but money is needed to support this groundbreaking project over the next five years and the Breakthrough Research Unit are launching a £5m appeal for the Research Unit tonight at Manchester's Town Hall.

It is really important that The Christie is continued to be given this freedom of research in order remain as one of the world's top research centres in fighting Cancer. I spoke with Breakthrough at the last Lib Dem conference about their plans and its great to see their plans working out. It is also brilliant to see more experts and researchers in the field coming to work at this Research Unit.

It was unfortunate that due to a vote in Parliament this afternoon, I could not spend more time there talking to the enthusiastic staff and supporters.

To find out how to help Breakthrough Breast Cancer reach its £5m target, visit breakthrough.org.uk/manchester or call 020 7025 2400.

Drink Driving and the Parliamentary Advisory Council for Transport Safety

Posted by Pablo O'Hana | Updated 2010-03-02
This afternoon I attended a meeting of PACTS (the Parliamentary Advisory Council for Transport Safety), of which I am a member. These are always well-attended meetings, although I was one of only two MPs at the meeting.
I have always argued that we should reduce the drink drive limit from 80mg to 50mg, and after a long campaign in Parliament, the Government changed its view. I have always suspected that this was due to a change of Ministerial personnel, as the former Minister Stephen Ladyman had been a staunch defender of the 80mg limit.
Sir Peter North has been placed in charge of reviewing drink and drug driving and he had met with PACTS on 27th January. One of the issues for discussion was the penalty for drink driving between the 50 and 80mg limit, and whether there should be a variable penalty regime.
I argued in the meeting that it would be a mistake to have lower penalties for those caught driving between 50-80mg. In my view, one of the reasons why we have managed to reduce the levels of drink-driving is because of the guarantee that a person would lose their license. Under no circumstances should we send out any message that might be misinterpreted as suggesting that being slightly over the limit is less serious than being significantly over the limit. Any drink-driving conviction should result in being banned from driving.