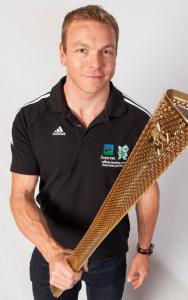 The Olympics are coming to Manchester over the summer and the build up is starting this month.

Sir Chris Hoy, winner of three Olympic gold medals for cycling in Beijing will be getting things started when he carries the Olympic Flame through Manchester on the 23rd of this month, the first of a 2 day spectacle that will be going through various areas of Manchester including Levenshulme. Find the routes by clicking here.

The torch will be going through Levenshulme – down the Stockport Road, on Sunday 24th June at around 8am with various local champions carrying the torch along the route.

Here are a few main points to take notice of.

If you’re going to a London 2012 sports event or ceremony, it’s important to plan and book your journey well in advance too. Security is expected to be tight whilst venues are encouraging those who have tickets to events to get to the venues around 2 hours early to allow time to go through airport-style security screening. To find out how to get to each venue click on the following link and click on the image on the left of the event that you are going to see.
london2012.com/spectators/venues/
When on the specific venues site the travel and visitor information for each site will be found on the right upper side of the site.
We’d also like to encourage anyone who is travelling to book their travel soon, with tickets from Manchester to London available for as little as £46 on National Rail:
http://www.nationalrailgamestravel.co.uk/
With ticket prices expected to go up the closer to the games it gets.

Anyway – I hope you all have an incredible summer and if you’re going to the games be sure to plan your journey well in advance. If you’re driving, be sure to take into account the extra traffic expected in London and also the various Olympic routes and parking regulations as heavy fines will be imposed by councils if parked illegally and an increase in traffic could lead to journeys taking longer than expected.
To be sure to plan your trip whilst in London most effectively take a look at Transport for London’s site and their journey planner